This week’s employment stats showed Scottish employment falling in the last quarter and unemployment and economic inactivity rising for the first time in two years.

What’s more average pay is still lower than it was a decade ago.

Coupled with low economic growth rates and falling productivity trends, the outlook for workers and the wider economy isn’t great.

While much of the action to address this sits at a UK level, the Scottish Government have put inequality and inclusive growth at the heart of their economic strategy.

So how could the Scottish Government ensure more inclusive growth, which combines greater equality, shared prosperity and does so within environmental limits?

Well a good place to start would be to prioritise actions that promote trade union membership and collective bargaining.

There is a strong body of evidence to show that high trade union membership and collective bargaining is associated with lower levels of economic inequality.

This can be seen historically in the UK where inequality, particularly at the extreme end, has risen at the same time as trade union membership and collective bargaining have fallen. 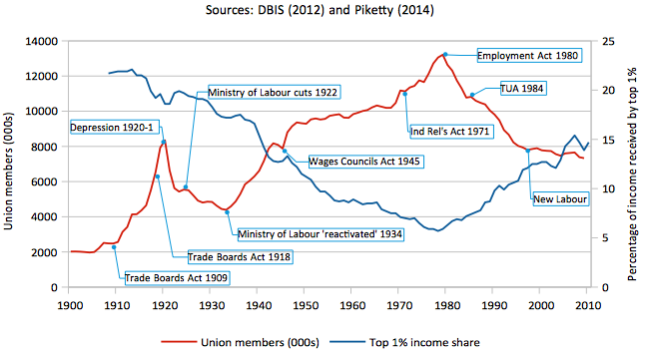 The relationship can also be seen when we look at collective bargaining coverage across Europe.

There is also a strong body of evidence to show that high levels of trade union membership are associated with increased productivity.

Research from NIESR into the response of employers to the recession found that ‘there is no evidence that workplaces have benefitted from Britain’s “flexible” labour market… on the contrary, workplaces with increasing unionisation appeared to benefit in terms of improved workplace performance’.

Similarly, longitudinal research from Norway has found that ‘increases in union density lead to substantial increases in firm productivity and wages’.

With output per worker in Scotland having increased at an average of 0.5% a year since 2007, and falling 3% in the last year, it defies logic to believe that the growth in precarious work practices and insecure employment is unconnected with a decline in productivity.

Trade unions are a crucial counter to low-road growth strategies based on precarious work and perform a crucial role as a countervailing force to the top 1%, reducing over-reliance on financial services and short-termism that inhibits sustainable investment.

If governments are concerned about inclusive growth and shared prosperity then they should be concerned about trade union membership. A good first step for the Scottish Government would be to have a target for increasing collective bargaining coverage within the National Performance Framework.