In the final part of a series of blogs looking at renewables in Scotland, STUC Policy Officer, Francis Stuart, looks at the corporations profiting from Scotland’s wind.

Two weeks ago hundreds of trade unionists, community members and environmental activists marched through the streets of Kirkcaldy. They congregated in the old Kirk where they were joined by politicians from the SNP, the Greens, and Labour, including Jeremy Corbyn. 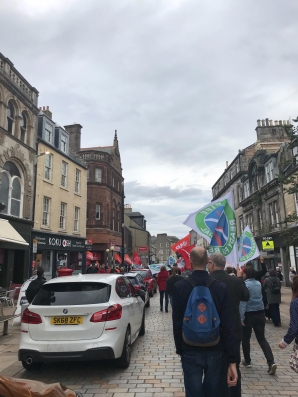 A snapshot of the Fife – Ready For Renewal march.

Fife has a proud industrial history and has proven itself an energy leader for generations. Once a heartland of coal in years gone by, its renewables yards could help power Scotland again if given the chance.All had a common message: we want jobs and investment in Fife, including in the Bifab renewables fabrication yards.

Yet sadly Bifab which, as recently as 2017, had more than a thousand workers on its book now has a couple of hundred.

This isn’t due to a lack of work in renewables. The offshore wind industry is booming. It is also increasingly profitable. Only last week it was revealed that the next wave of offshore wind projects will no longer receive subsidies, because costs have tumbled by a third to about £40 per megawatt hour, which is less than the price of electricity in the wholesale energy market.

Rather, the reason that Bifab is operating below capacity is due to decisions by multinational companies to maximise profits. EDF, the French-owned electric utility company, is building its new £2 billion Neart na Gaoithe (NNG) offshore wind farm less than 15 km off the coast of Fife. Yet it plans to ship turbine jackets from Indonesia rather than building them in Fife yards. This is despite the project being subsidised to ensure the developer makes £114 per megawatt hour. Anyone doing the maths between £40 per megawatt hour and £114 per megawatt hour can see that EDF are about to make an absolute fortune.

While it might be EDF in the firing line right now, they aren’t the first and they won’t be the last. SSE have just won a 15-year contract for their Seagreen project consisting of 120 turbines in the Firth of Forth.

There are also plans for further large developments such as Inchcape Offshore Wind Farm off the coast of Angus developed by the Chinese-owned company Red Rock, as well as Moray West Offshore Wind Farm developed by the Portuguese and French firms EDPR and ENGIE. Although both were unsuccessful in the latest round of contract auctions, they are likely to try again in the next round.

Concerns have already been raised about working conditions on many of these projects. The RMT have raised concerns that survey work undertaken for Inch Cape has been carried out by Horizon Geosciences, a United Arab Emirates Agency, using seafarers from outside the EU paid less than £4.20 an hour.

Renewables is now big business and it should be treated as such. As Unite the Union’s Scottish Secretary, Pat Rafferty, said at a community meeting in Buckhaven ‘we have a clear message for all these developers: we want the work and if we don’t get it, we are coming for you’.

Last week saw the inspiring sight of thousands of climate strikers take to the streets to demand real action to address the climate emergency. This week the Scottish Parliament passed new Climate Change legislation and the UK Labour party declared its support for a Green New Deal to decarbonise the economy by 2030.

In many ways, the campaign to bring renewables jobs to the Fife yards is a litmus test in whether we can deliver on these ambitious targets.

Renewable technologies aren’t the future. They are the here and now. Whether they are deployed to the extent needed depends on community support. When energy corporations like EDF chase profits and move manufacturing to Indonesia, not only do they offshore jobs, carbon emissions and tax revenues, but they create a backlash to climate action.

Trade unions, community members and environmentalists like Friends of the Earth Scotland have demonstrated their desire to bring jobs and economic benefit to local communities while playing their part in tackling the climate emergency.

Corporations and politicians who purport the same and talk of a Just Transition for working class communities like those in Fife, must now do likewise. Anything else is a dereliction of duty.